The cheap way to fly in Kiwi land is standby on Air New Zealand.  Traveling worked out perfectly for me today as I flew standby from Christchurch to Wellington for only $79 New Zealand Dollars.  That is about $63 US dollars at the current exchange rate.  Not too shabby! 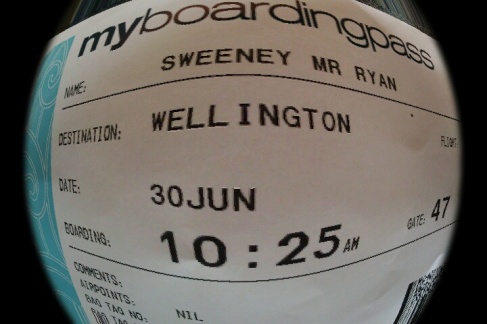 I decided to stay at X Base Hostal in Wellington as I thought the one in Queenstown was pretty good.  There are five X Base Hostals in New Zealand and three in Australia.  It cost me $25 New Zealand dollars for a bed in a six-bed dormroom tonight.  This hostal is abuzz with travelers right now watching a movie in the lounge, cooking dinner in the massive communal kitchen, and even some Spanish guys kicking a soccer ball around in the dining area.  This hostal building is gigantic with several, spacious lounge areas and a huge bar with events every night.

I walked around Wellington today and ran into Harriet, a girl I met in Auckland while working behind the scenes on the independent film.  She was one of the extras in the scenes shot at the bar, Golden Dawn.  I recognized her while strolling on Cuba Street.  She was watching a busker’s music equipment and told me she came into town to see her friend’s band perform.

Wellington is a bustling city with a business-district downtown, cool vintage shops, great restaurants, and a beautiful waterfront area surrounded by experimental architecture and several museums.  At the moment, I have no idea what tomorrow will bring or where I will go.