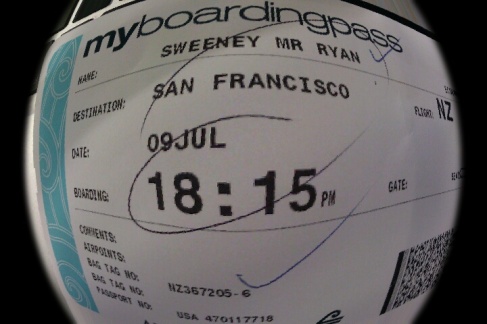 As I was driving and speeding to the airport with the radio blasting, late to my flight, in my wrecked, filthy, broken down rental car, I realized how lucky I was to experience New Zealand the way I did.  It felt really good!  I haven’t been able to BLOG lately because I have been up to no good fun just like the rest of my crew.  We finished filming and then unfortunately, it was on like donkey kong.  Thank heavens I’m about to board in one piece.

I have so much to say right now on my experience in the last few days in Auckland, witnessing the independent film at different locations.  I have written much of what I want to say, but I don’t want to post it yet as I need the photography to be included.  I also need to be gone from the country so none of you can physically hurt me when i reveal the “real behind the scenes” BLOG entries.  Have you seen that movie “Almost Famous” where the kid comes along and befriends everybody, but then reveals the dangerous truth when his article came out?  That’s me in some sense, but I have photography to prove it.  I have the film behind the film, but no worries, gang, as my BLOG is not very popular anyway.

I don’t have the time at this airport gate as I am sweaty and barely able to get online now as I have to board and can’t believe i actually made it.  I also sent Shiloh a fairwell message about the wreckage we have left him. Sorry, Shiloh!   I will probably never be invited again to one of his productions because of my careless behavior.  But at least I got him to upgrade me to first class for my direct flight home!  Woo hoo!  See you crazy Kiwis later.  Graham, get some sleep.

Shiloh, keep on doing what you’re doing.  The way you put this whole thing together is really impressive.  I have more to say and display!  I will soon, but thank heavens I am actually getting on this plane. To the rest of the film crew – you scallywags!  Love hurts sometimes and can be such a terrible thing.  That’s why i love every single one of you so much.  Safe Travels.