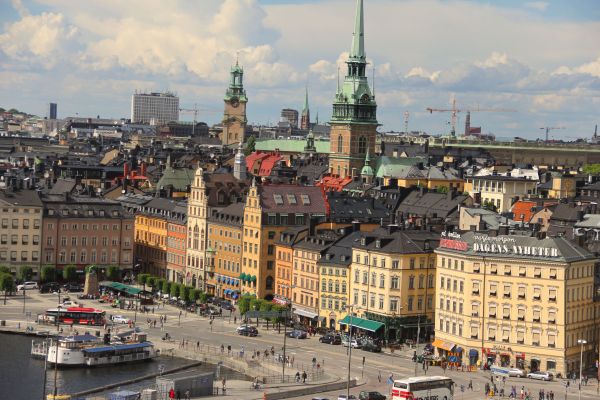 The Winter’s here fill these cobblestone streets with mountains of snow from September to April; they are unable to dump the snow in the surrounding waters because the environmentalists think the salt and sand that is mixed in to maintain the roads will harm the natural environment. Some roads turn into small, narrow pathways for pedestrians because the snow piles up so high. 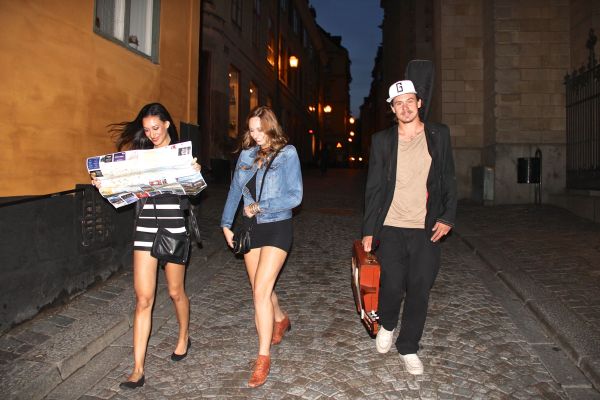 The climate changes rapidly every day – the clouds roll in fast, pour down rain and then the sun breaks through making for wonderful skies; this happened a few times a day during our stay here in June.  When we first came here we encountered a lot of rain. 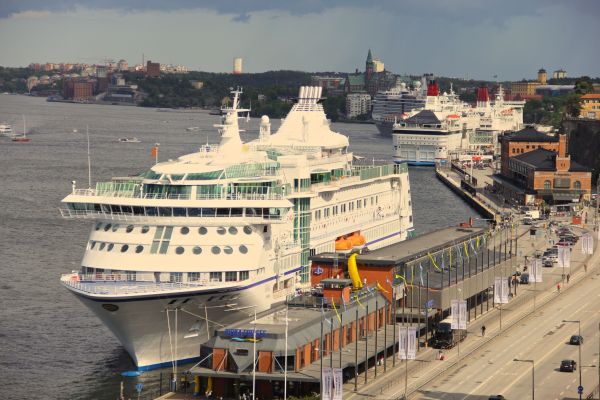 One time we set up to busk in the old part of the city, Gamla Stan, and thirty seconds in to our first song it started raining on us and our equipment.  We grabbed our battery powered amps as fast as we could and rushed under an old arch entryway of a building.  People were surprised to see us playing under the archway as they walked by with umbrellas. 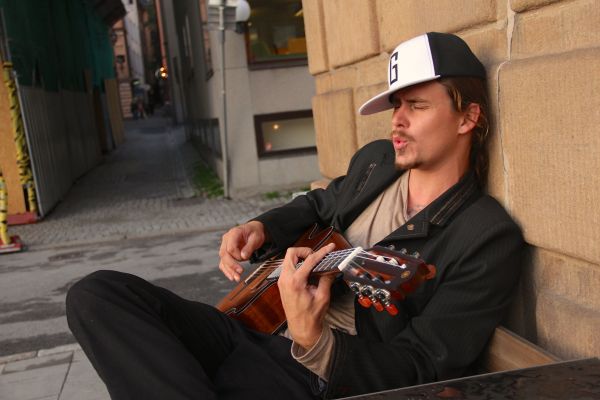 It doesn’t get dark here until 2200 and the birds start chirping at 0230 when it starts getting light out.  It doesn’t get very dark and the skies in the evening are delightful.  The architecture is classic and the cobblestone streets are intricately patterned which can be seemingly pyschedelic at times. 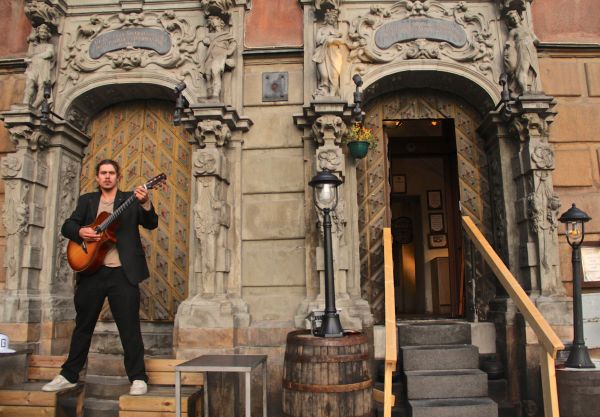 We met some American girls at the Castanea Hostal and they invited us to check out the night scene in Stockholm.  First we did the tourist thing and checked out the Stockholm Ice Bar and had had some Vodka drinks in Ice Glasses. 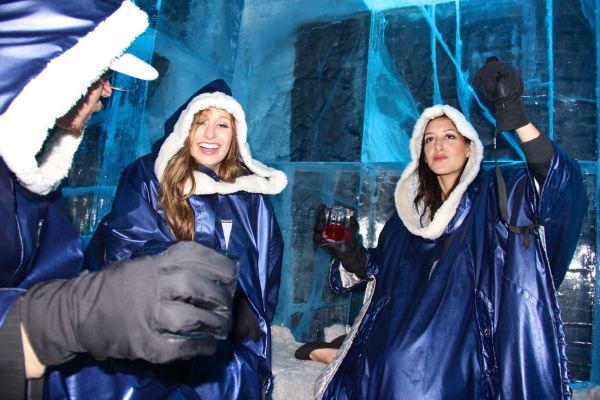 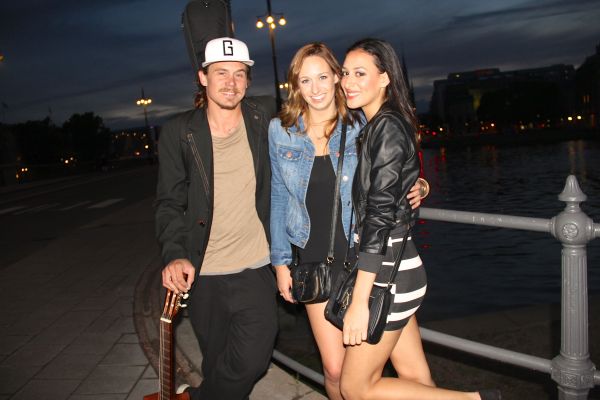 We then went out to a popular nightclub and danced with the locals.

I found most of the locals to be very kind, educated, and quite good-looking. 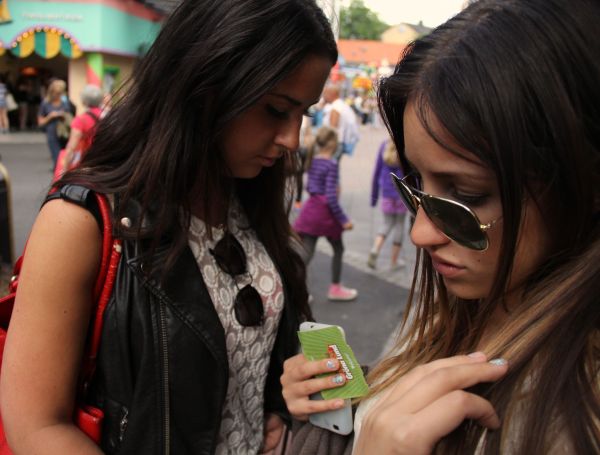 However, we did notice that this city was very conservative and the clubs had a very strict policy – anybody that looks slightly intoxicated gets thrown out.  Oxymoronic if you ask me because it’s a bar and they should want to make money!  Nevertheless, we still love this city even though Justin got kicked out of a couple bars for his suspiciously intoxicating look, even though he was dead-sober.  We were refused entry into a couple bars and clubs as well because they were exclusive with membership.

Justin and I stormed around town with our equipment, plugging into our portable amplifiers and loudly playing our music at some amazing locations in public.

We got busted by the police in Södermalm on a lovely sunny, Sunday afternoon.  The police said we were too loud, but we had no complaints from the crowds of dancing kids and parents.  Södermalm is the popular part of town that is an excellent location for good food and nightlife. 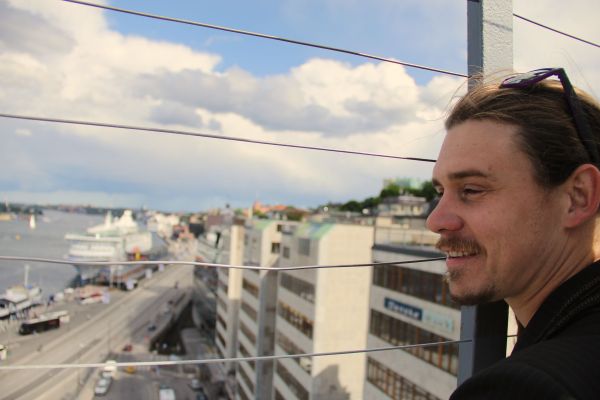 We were lucky to get hired off the street by the tech company, Aptitud, to perform at their private party in a very cool office in Gamla Stan. They were extremely welcoming, offering us great food, beer, wine and amazing conversation. These guys were so intelligent and friendly, and I admired how they would invite everyone off the street into their office party.  Thank you, Aptitud!  You guys rock!

Our Stockholm booking agent and now good friend, Love Carlsson, escorted us all around town on Saturday so we could perform at popular spots in the city loaded with people. Thanks to Love Saturday was an amazing day of endless performances around town at various parks.  We first performed at a beautiful park on the water – Rolandhovsparken. 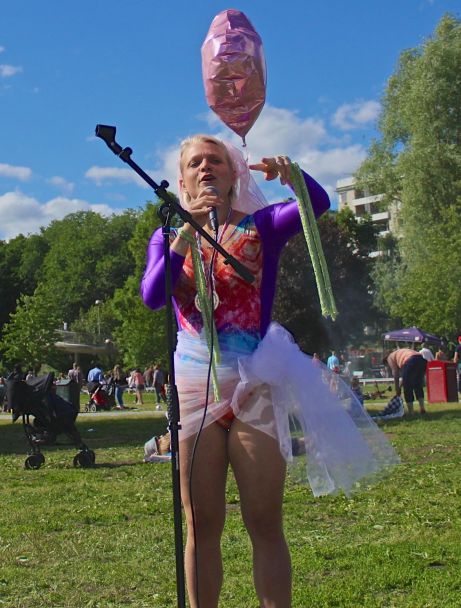 We always try to find a good skate park in every city to connect with the youth, give them a great live show, and also so Justin can show off his skate tricks.  We really enjoyed playing at Fridhemsplans Skate Park and the acoustics there were awesome. 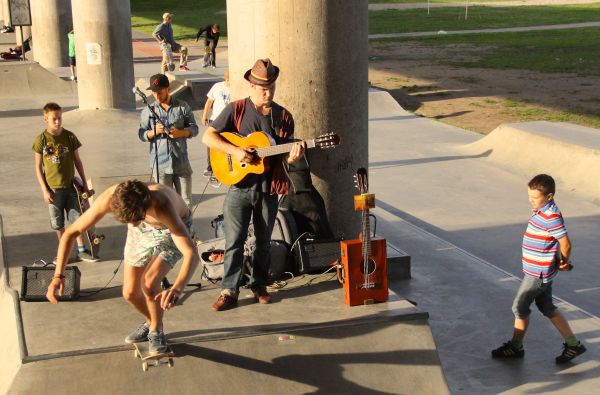 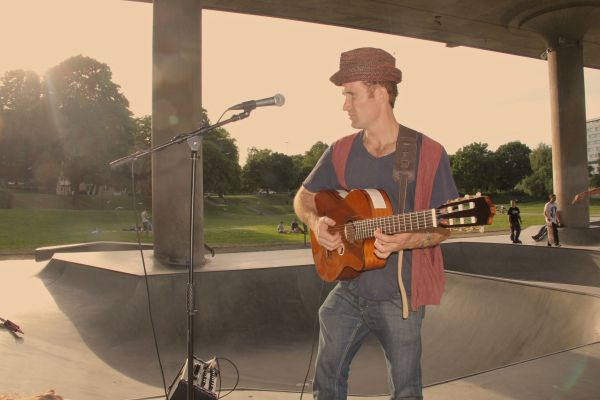 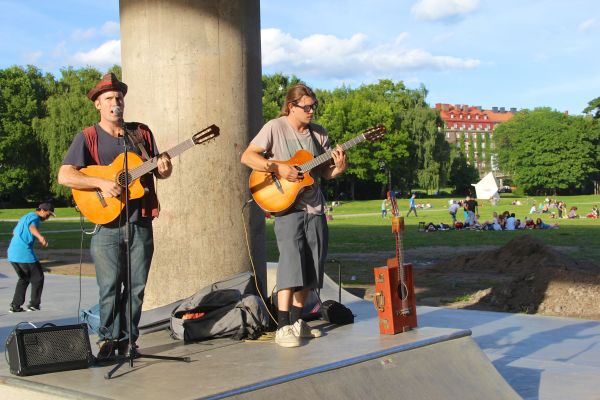 Our favorite spot we performed was on this sweet, rock mountain that overlooked the entire city – Skinnarviksberget. 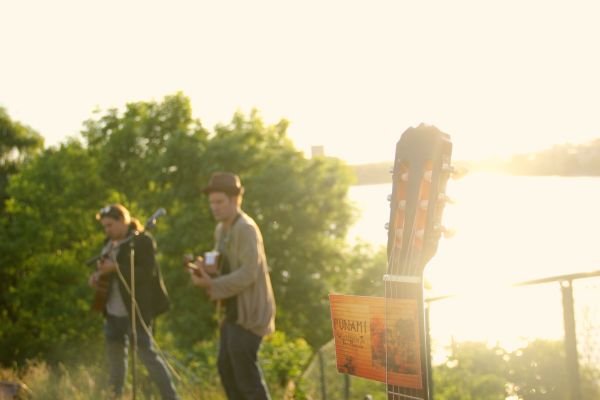 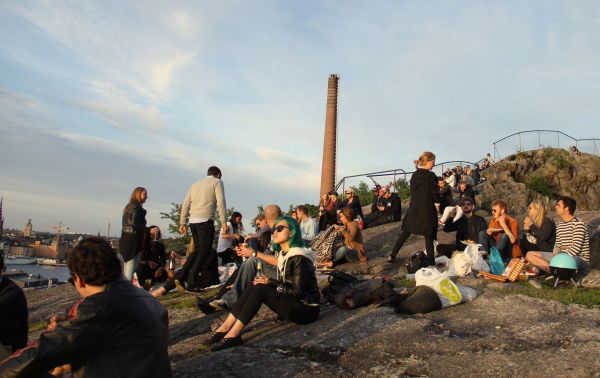 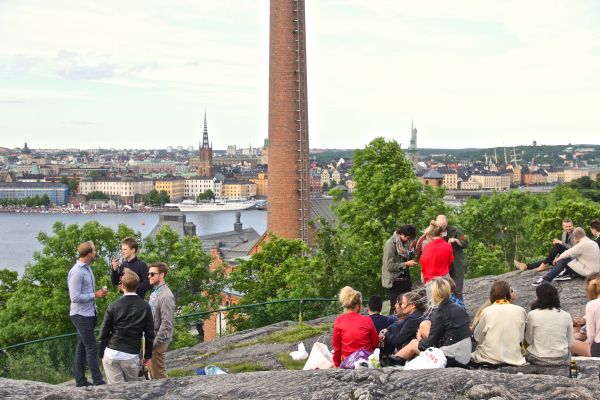 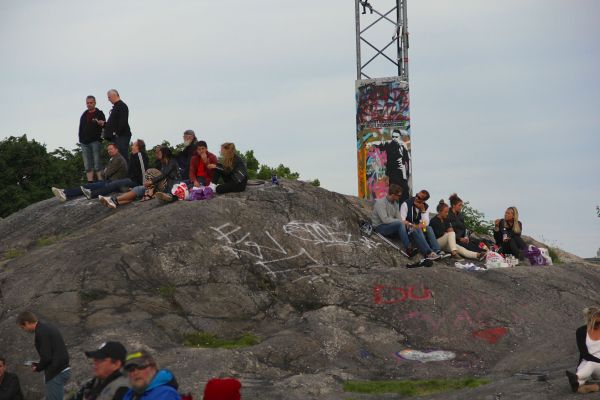 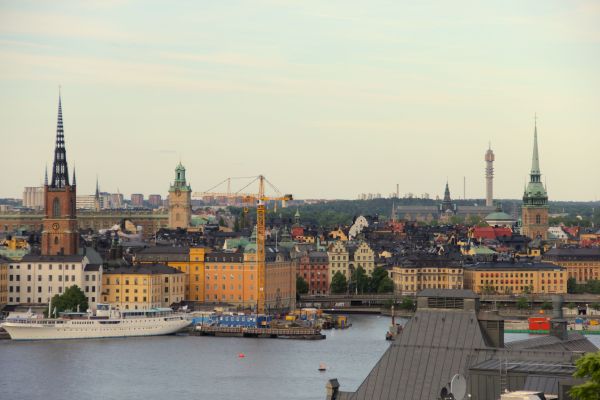 We announced our performance time through flyers and had a great turnout at this scenic park.   We played on the bottom of the rocks so the music could travel up the rocks which was great for our sound. 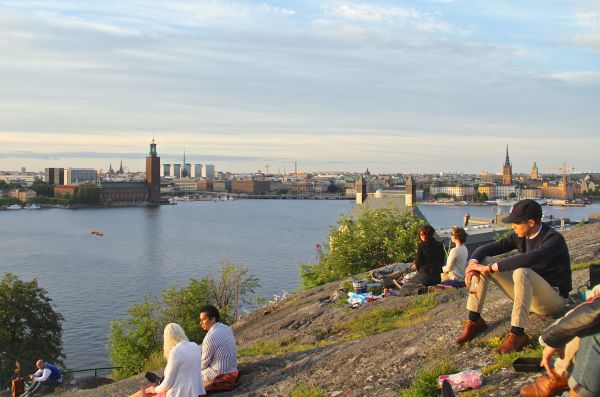 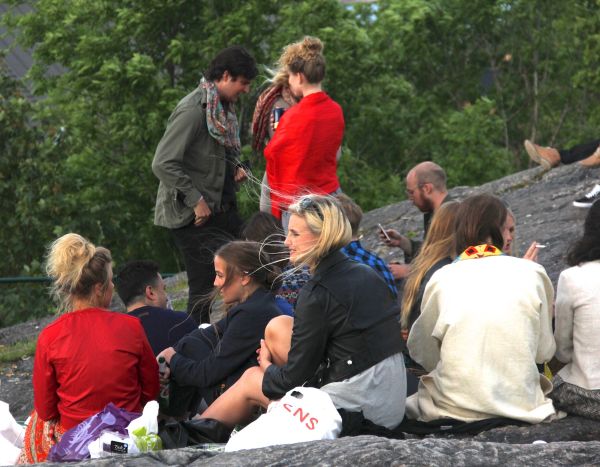 There was a boat race going on in the harbor just before we performed. 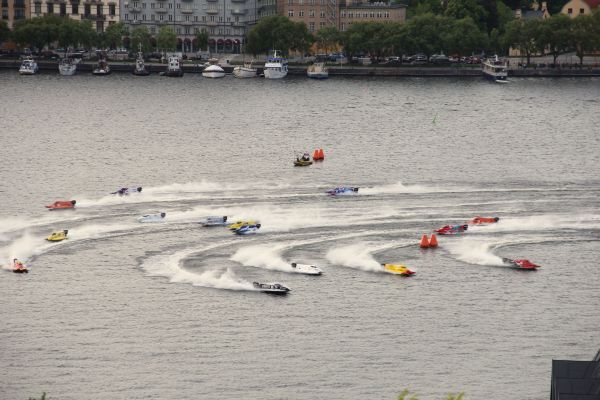 Skinnarviksberget is an amazing location to watch the sunset – so we played at sunset which was a magical location for me to perform.  The crowd was so inviting and warm.  Wish we could rock Skinnarviksberget rocks every sunset! 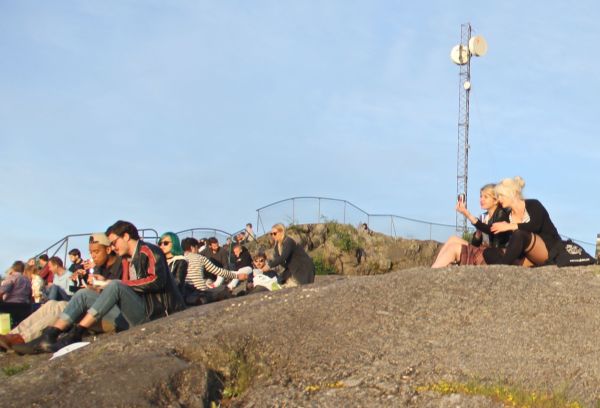 Love Carlsson was our local booking agent and turned out to be a good friend as well.  Thank you, Love! 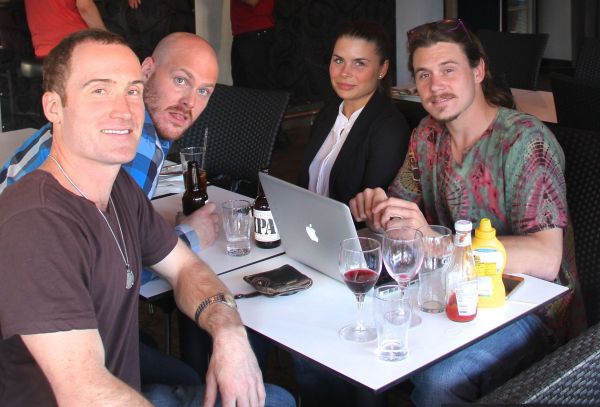 Along with helping us find great locations in public, Love booked us two gigs during our stay in Stockholm.  We played at a cool club called K2 and we were happy to be part of a very rocking line up on a Saturday night with some great local acts. 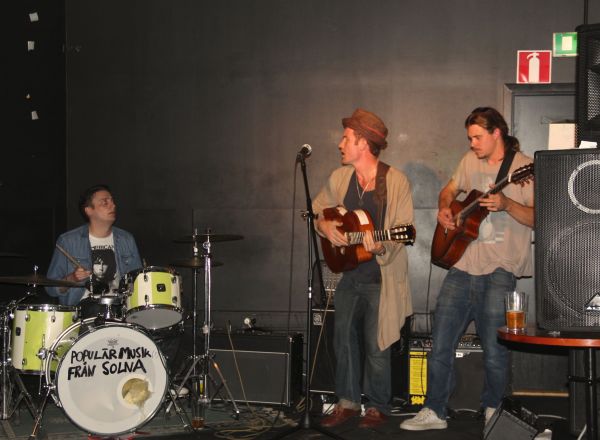 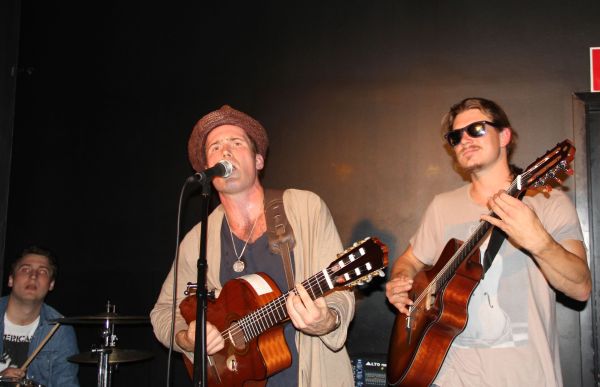 We also played a gig at the Dubliner and had a great turn out from our friends in Stockholm. 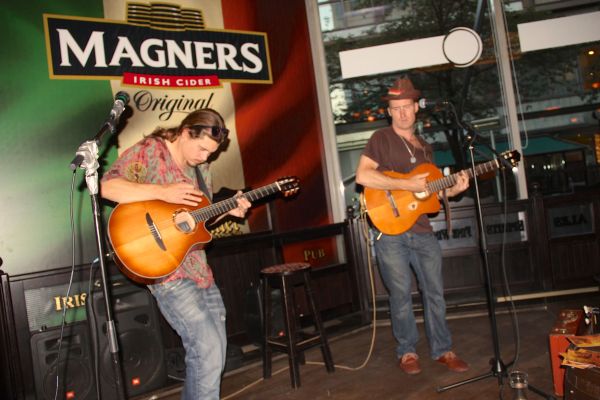 Our final night we had wonderful dinner with Love and his girlfriend, Sara.  The Wild Salmon was to die for!

Our trip to Stockholm was unforgettable.  I am writing this now on the train to Copenhagen.  Justin is sleeping across from me – getting his beauty rest for the dangerous nights ahead.  Goodbye, Stockholm! 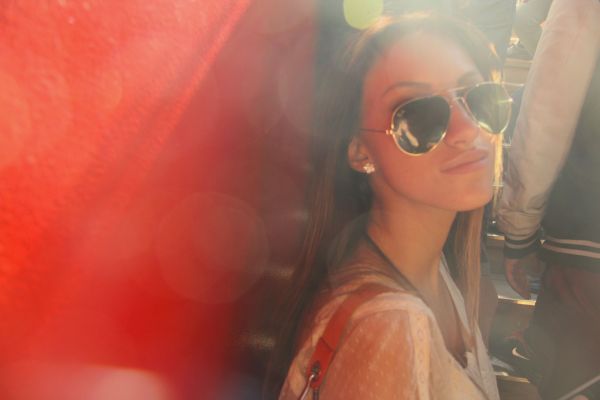